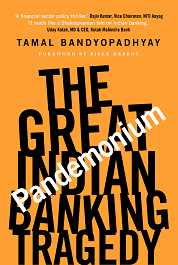 In this guest blog Tamal Bandyopadhyay quotes extracts from his just published book ***`***Pandemonium: The Great Indian Banking Tragedy’ and highlights the questions galore on governance the book seeks to answer.

While I have often – though not always, written about the success stories in the Indian banking sector, my latest book turns a spotlight on the dark underbelly of Indian banking with all its stories of fraud, greed, fear and poor governance.

‘Sensational’ is just a bald statement of fact when it comes to describing the way Gokulnath Shetty, a deputy manager in a Punjab National Bank branch, under the nose of Reserve Bank of India’s central office in Mumbai, helped to pull off a fraud of nearly $2 billion. Shetty received just one promotion in his 36-year career, and spent the last seven years at the branch where the fraud took place. He was an unassuming character who commuted by local train and autorickshaw even as he was helping to rake in huge sums by exploiting a flaw in the system.

Then, there is the story of Kingfisher Airlines. The auditors and the regulator emerge in poor light in that sorry episode.

Bankers can and do take wrong business decisions in good faith. But the investigative agencies proceed under the presumption of criminality. This feeds into an apparently endless public craving for vengeance, however misdirected that might be. Social media adds fuel to the fire. Charge-sheets are filed; bankers are arrested; even sent to jail. In another case, the chief of a public sector bank was sacked just eight minutes before her scheduled retirement.

A few retired bank executives spent months at Mumbai’s Arthur Road Jail in a barrack for undertrials, sleeping on threadbare rugs laid out on concrete floors and using primitive amenities. They endured this until a court decided whether they (like countless others before and since) were guilty or innocent.

The book also takes a deep dive into the stories of Rana Kapoor, the promoter and CEO of Yes Bank, and Chanda Kochhar, a career ICICI Banker, and a Padma award winner. The details of those stories are very different, but the underline theme is the same: The biggest casualty has been corporate governance. The boards ate out of the hand of the CEOs; the chairman went out of his way to certify their conduct.

The fate of those two erstwhile stars rang the death knell for the personality cult in banking. Also, many staunch believers in bank privatization have begun changing their minds after revelations about the style of functioning in these two large listed private sector banks and the way their boards functioned.

Some extracts from the book are given below. These relate to the acute fear psychosis that has built up among public sector banks, board oversight in banks and some observations regarding bank supervision and policy, Seemingly unconnected, all stories eventually highlight a key theme: that governance matters.